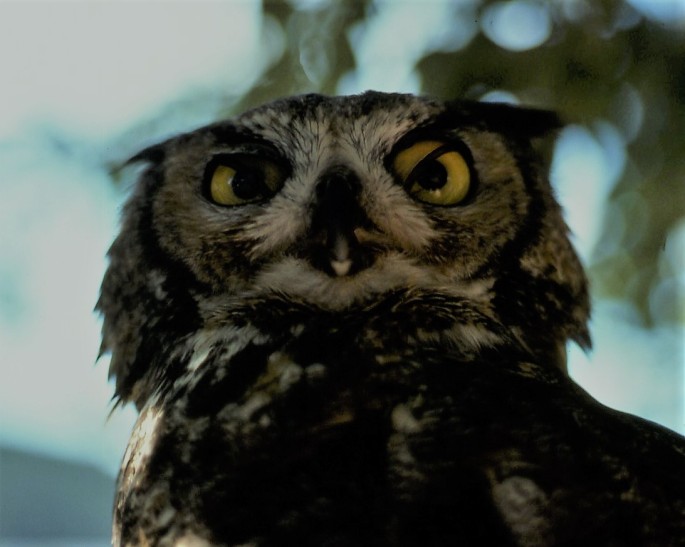 Kevin Costner was coming to the Big Bend to make a movie and the producers of “Fandango” needed a live owl. Becky Smith, the bus driver for the longest school bus route in the United States, from Terlingua to Alpine, had given me a Great Horned Owl that she had found alongside the road months earlier. It was in pretty bad shape when I received it from an apparent collision with a power line. After two months of rest and all the meat scraps from Safeway it could eat, it healed quickly.

After spending the night at the Calvary Post in Lajitas, I was instructed to meet the film crew at sunrise at the Big Hill pull-off on the River Road to Presidio. Everyone was there, Kevin Costner, a number of actors I had never heard of, the camera crew, make-up people, an animal handler and some food people who had parked a silver canteen truck close by. I’ll never forget my first plate of sushi out in the middle of the Chihuahuan Desert on a hot spring day.

Unfortunately for the owl the sun had moved too fast in the morning to get the shots needed for a low light scene of an owl on a boulder. We had to wait all day for the sun to go down. During the wait I got to know the animal handler who told me all about the other animals that were needed for the film including armadillos, snakes, lizards, coyotes and a roadrunner. My owl was an important part of a camping sequence when as is almost always the case in American films, a hooting owl at night scares everyone around the campfire.

When the time came to get ready for our important scene I was instructed to bring the owl to a large boulder where the animal handler would set him on top. I asked him what would happen if the owl were to jump off the huge rock and fly away? The answer was simple, monofilament line was tied to it’s leg. If it jumped off we’d pick it up and try again.

Everything was ready, the cameras where set and as they began to roll the owl readied for his film debut. As quickly as the director could say “action” the owl jumped off the rock, took one giant leap, broke the monofilament, and flew across the high walled canyon of the Rio Grande and on into Mexico, never to be seen again.

You won’t see an owl in the movie Fandango, but next time you drive the River Road (Texas 170) at night, stop alongside the pull-off at the Big Hill and listen. You might just hear that “Fandango” owl or one of its descendants hooting in the distance…a sound that I hope will forever be heard in the canyons of the Big Bend, long after movies and movie stars are forgotten.

2 thoughts on “The Fandango Owl”